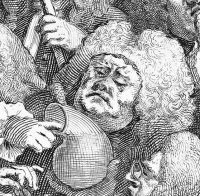 William Hogarth was more intimate with the profession of medicine than many other early cartoonist. In 1734, Hogarth, upon hearing the St. Bartholomew’s Hospital’s board of governors intended to hire an Italian painter to produce a mural, offered his services gratis. As a result, Hogarth secured his election to the same board of governors. While Hogarth’s mural would not earn the artist future commissions in this vein, it did give him intimate access to the world of professional medicine in London.

Hogarth’s most famous medical caricature, The Company of Undertakers (1736), comes out of the period in which he was most closely involved with St. Bart’s Hospital. With a caption reading “And many are the faces of death,” Hogarth here creates a mock coat-of-arms for the physicians of eighteenth-century London, combining his experience engraving British heraldry with the more newfound pleasures of caricature portraiture as they were imported from Italy (more about this genealogy in a later post). The three featured at the top were well-known “quacks”—unlicensed practitioners—including the bone-setter Sally Mapp at the center. By placing these figures in the privileged position at the top of the grouping, and identifying them in the caption underneath as the DOCTORS and the twelve figures below them as the QUACKS, Hogarth deliberately inverts the hierarchies of the profession, refusing the distinctions the Royal College of Physicians had spent the previous two centuries attempting to enforce. The group below are the properly licensed doctors of the city, but notably Hogarth refuses to distinguish between them; they are all “undertakers.”

Beneath our elevated quacks gather the dozen licensed physicians, each bedecked with their traditional wigs and holding their canes, whose handles—stuffed with camphor or mint—they ostentatiously sniff. At their center we have this gentleman, his finger dipping into the urine flask—engaged in the increasingly discredited but still widely practiced uroscopy—while his colleagues on the lowest rung of the group portrait look on with interest.

In Company of Undertakers, Hogarth zooms in tight for a most unflattering closeup, allowing us to see the licensed physicians of London not as they wish to be seen but as they truly are. We don’t know the identities of most, although all are believed to be based on doctors practicing in the city at the time. But one of them is known to be John Bamber, and conveniently we have a portrait of him as he wished to be remembered (left). Hogarth himself had knowledge of Bamber, as he had recently become a member of the Board of Governors at St. Bartholomew’s, the same hospital from which Dr. Bamber had resigned in a huff when the Board refused to employ his son-in-law. One can imagine that Hogarth, now an insider to hospital business and seeing the men behind the wigs and canes, likely had similar stories about each of those gathered in this scene.

The second image featured in the Drawing Blood exhibition comes from later in Hogarth’s career, the final installment in one of his print series that would play a crucial role in the development of sequential narrative comics in the 19th and 20th centuries:

The dismal career of Tom Nero began with sodomizing a dog in plate 1 and quickly descended to murder. In this final installment in the series, we see our villain receiving his just reward. Following his hanging, the corpse has been handed over to the College of Surgeons (only recently split from the Company of Barbers). In the upper left we see a cluster of physicians with their hallmark canes condescendingly observing the proceedings, while the surgeons gouge with a viciousness that suggests little distance between them and the criminal they dissect. A dog, fittingly, gets the last laugh by gorging on the heartless heart of Nero.

[Note: the captions to the images are linked to the highest quality images we could currently find]