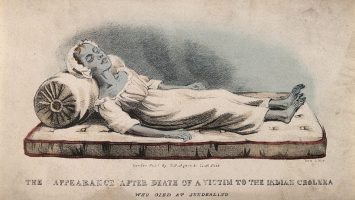 This post will serve as a primer for a series of posts about a 19th-century disease that thrilled and terrified the globe: Cholera.

Cholera is an acute bacterial infection of the small intestine that is spread through the fecal-oral route of transmission. In order to contract the disease, one must consume food or water contaminated with the bacterium known as Vibrio cholerae. Once ingested, the bacterium can develop into cholera in as little as two hours to five days after exposure. The main symptom of the disease is the expulsion of a large amount of diarrhea with the distinct look of rice-water. Vomiting, nausea, and muscle cramps may also occur in the early stages of the disease. Most people won’t develop symptoms and fall ill, but they still carry and spread the bacteria through their stool.

The source of contamination is typically the improper disposal of a cholera-infected patient’s waste. One diarrheal episode can introduce a one million-fold increase of V. cholerae to the environment, making the spread explosive to the point of pandemic levels.

While cholera may find its roots in the 4th century B.C.E., and the most recent epidemic occurring as recently as 2018, cholera is overwhelmingly considered a disease of the nineteenth century. This has to do with increased speed and ease of transportation that the Industrial Age brought, allowing cholera to travel as well.

Tracking the outbreak of epidemics shows the disease making its way from endemic areas in Asia to Europe and America through waterway trade routes. Additionally, the increasing urbanization of European cities generated the perfect unhygienic sanitary conditions to engender massive outbreaks. Six of the seven historical cholera pandemics occurred across the span of the 19th century alone.

The Victorian’s understanding of cholera was a tangled web of different methodologies to explain the cause and spread of the disease. The dominant theory of disease at the time was the Miasma theory. It was believed that disease was transmitted through the inhalation of a noxious vapor called Miasmata.

Miasmata was thought to be comprised of decomposed matter⁠—open cesspools, decaying corpses, rotting vegetation, the exhale of an infected person⁠; all things identifiable by their foul smell were the infectious agent of miasmata. Therefore, disease wasn’t spread person to person but independent of direct physical contact through the foul-smelling and visible fog of miasma.

Cholera no longer inspires the same all-consuming terror as it did in the 19th century. As we came to accept the germ theory model of disease and isolate the bacterium that causes cholera, we gained the understanding of how to prevent and treat cholera, making it increasingly rare in the developed world.  To the western world, cholera appears now as a disease of antiquity, making the terror it engendered difficult to understand and imagine.

But 19th-century society’s fear of cholera was not unwarranted, as it truly was a terrifying disease. Its spread was explosive, the onset of its symptoms rapid, and the death it brought unique both in terms of immediacy and brutality. The progression of the disease was a horrific sight to behold and left behind a striking corpse. Because the initial symptoms aren’t accompanied with pain or fever, the initial stage can pass without recognition that a person has even contracted cholera.

A Young Woman Before and After Cholera illustrates the radical difference between a healthy patient and an infected one. Cholera can kill in a matter of hours, so in the course of a day, this young woman could undergo this dramatic physical change before expiring. Artist Unknown, (1831), Courtesy of Wellcome Collection.

A patient, who had otherwise seemed healthy, would grow weak and lethargic, then suffer violent and spasmodic muscle cramps or convulsions. The heart rate would quicken while blood pressure dropped, resulting in weakness, confusion, and fainting. Now severely dehydrated, the body stops supplying blood flow to the skin, diverting it to the vital organs. As a result, a person’s skin, now lacking oxygen and blood flow, would become shriveled, cold to the touch, and blue in color. They’d have a gaunt, drawn complexion from rapid weight loss and would be breathing rapidly.

The patient would eventually go into hypovolemic shock: the condition where the critical loss of fluids render the heart unable to continue pumping blood to the body, resulting in either cardiac arrest or organ failure. By this point, the person may have already fallen into a coma, leaving behind soiled sheets, a frightening corpse, and the lingering fear that the caregivers might fall prey next to the Blue Terror.

The Appearance After Death of a Victim to the Indian Cholera Who Died at Sunderland, Artist Unknown, (1831), Courtesy of Wellcome Collection.

Unlike a cold, cholera was not caught⁠—it struck, and it did so like lightning. Rev. W Leigh, in his recount of the 1832 outbreak hitting his town, wrote:

The condition of Bilston had now become frightful. The pestilence was literally sweeping everything before it, neither age, nor sex, nor stations escaping… To describe the consternation of the people is impossible. Manufactories and workshops were closed; business completely at a stand; women seen in a state of distraction running in all directions for medical help for their dying husbands, husbands for their wives, and children for their parents; the hearse conveying the dead to the grave, without intermission either by night or day; those inhabitants who possessed the means quitting their homes, and flying for safety to some purer atmosphere; those who remained, seeing nothing before them but disease and death.

While cholera disproportionally impacted the poor and had overwhelming connotations of poverty, the experience of cholera felt like an invasion, laying waste to everything in sight.

Robert Seymour, Cholera Tramples the Victor and the Vanquish\'d Both, (1831), Courtesy of the U.S. National Library of Medicine

The skeletal figure of cholera crushes its victims indiscriminately beneath its bony feet. Above its shrouded head lurks the black miasma through which the illness was believed to spread.

Emily Winter is an archivist of everything from the miasmatic to the purulent.