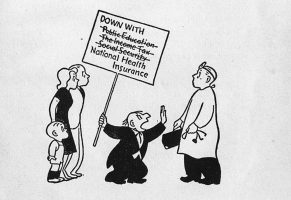 Until the post-war period, health care policy played a minor role in presidential politics. Franklin Delano Roosevelt’s plans for national health insurance remained incomplete when he died in office in 1945, and every subsequent president from Harry Truman to Donald Trump has wrestled with the unfinished business of health care reform. Lyndon B. Johnson passed Medicare and Medicaid and Barack Obama oversaw the passage of the Affordable Care Act. However, the fundamental challenges of trying to make a for-profit medical system accessible and fair remains very much unresolved.

Presidential politics begins in earnest with Harry Truman’s signing of the first proposal for a national health plan. As President Truman argued to Congress in 1945: “Millions of our citizens do not now have a full measure of opportunity to achieve and enjoy good health. Millions do not now have protection or security against the economic effects of sickness. The time has arrived for action to help them attain that opportunity and that protection.”

Indeed, cartoons were used to explain a complex bill to voters:

The primary opponent of the plan for a National Health Care plan was the American Medical Association, who quickly branded the plan as “socialized medicine” and tapped into growing anti-communist sentiments as the Cold War began to pick up intensity to represent the plan as a slippery slope to bringing Soviet policies and values to America’s shore.

The National Physician’s Committee, a lobbying arm of the AMA organized in 1947 to attack Truman-era health care proposals, sent out a call to editorial departments at newspapers across the country, announcing a contest to encourage editorial cartoonists to express their opinions about nationalized health care. At least one paper, the Akron Beacon Journal in Ohio, wrote back in February 28, 1948 articulating publicly their refusal to participate in this “contest,” despite the fact that the editorial board of the paper had serious reservations about the proposed health plan. “The reason is simple,” they wrote, “Space on our editorial page is not for sale.”

A couple of months later, Senator Murray of Montana, one of the sponsors of the bill, denounced the tactics of the AMA in seeking to weaponize the nation’s editorial cartoonists against the bill. The goal of their “contests,” he argued on the floor of the Senate

is to smear the whole project as socialized medicine, relying on the effect of the horrendous word “socialism” to scare ordinary minded citizens away. Not content with this snide attack, they are now labeling the proposal out-and-out communistic. Riding the wave of our present international difficulties they are working the “Red menace” for all it is worth.

In reporting Senator Murray’s speech, the Washington Post concurred, arguing “the ‘contest’ rules leave no doubt that this is a subtle bribe to cartoonists.”

Not all editorial boards shared these compunctions, and of course many were themselves skeptical about the proposed national health insurance. Editorial cartoons opposing the proposal outnumbered those defending it. Here are some examples:

The AMA was keenly aware of the power of comics to shape this debate, and so in addition to encouraging editorial cartoons to create work arguing against “socialized medicine,” they also hired the services of Will Eisner. Eisner was one of the pioneering figures in the newer cartooning medium of the comic book, having founded one of the first comic book studios at the dawn of the industry in the late 1930s and brought the comic book format to newspapers with The Spirit in the 1940s; in 1950 he was branching out on his own with a new business designed to bring the comic form to educators and advertisers.

The Sad Case of Waiting-Room Willie was paid for by the Baltimore City Medical Society, one of the myriad local medical organizations that worked with the AMA to fight the proposed health plan. As the Journal of the American Medical Association celebrated the publication in 1950:

[It] dramatize[s] the unfavorable aspects of socialized medicine in a form that is readable, entertaining and nontechnical enough to reach all the voters. Briefly, the story of Willie is a collection of incidents, most of them from factual reports of occurrences under socialized medicine plans in other countries, but all happening to one poor waif, who is really sick and unable to get medical care under the New Utopia because the doctors he tries to consult are overrun with unsick patients who have also paid their health taxes and have an equal right “under the law” to take up the doctors’ time.

The AMA’s journal goes on to encourage all Maryland doctors “to order at least 200 copies at three cents apiece.”

Not all cartoonists opposed the bill, of course, and one nationally-renowned artist lent his aid to those working for its passage. Crockett Johnson, famous at the time for his daily strip Barnaby (and soon to be known for his children’s classic Harold and the Purple Crayon) drew cartoons for a 1946 pamphlet entitled For the People’s Health, put together by a physician’s group that had broken with the AMA over this issue. And he also slyly called out both the AMA and editorial cartoonists for conspiring against the bill so openly in a Barnaby strip from 1949 in which a dragon is revealed to have been spending his spare time posing for editorial cartoons against “socialized medicine.”

Of course, in the end—despite the passage of National Health Care in Britain, which went into effect in 1948—the cause was doomed in the U.S. The combination of the deep pockets of the opponents to national health care, the rising tide of Cold War hysteria, and the effective use of media—especially comics and cartoons—by the AMA led to the ultimate shelving of the bill. The strategies for beating back attempts at universal health care were established in this initial campaign, and thus far it has continued to prove effective. The United States remains one of the few developed nation’s without some form of national health care.