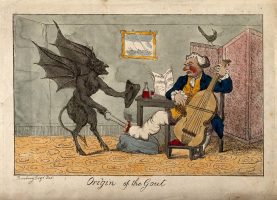 Gout: The Disease of Kings

Common treatments for gout involved elevating the foot to relieve inflammation and wrapping the affected extremities in flannel. The gout stool can be seen in a number of cartoon depictions of gout sufferers.

If there is one word to sum the connotation of gout in the 19th century, it is excess. Excess of wealth, food, alcohol, and even sexual gratification. Historically, the disease was known as “the rich man’s disease” or “the disease of kings.” The primary cause of gout was long thought to be the overindulgence of meat, seafood, and alcohol—a diet only the affluent could afford. Despite the debilitating pain, gout was considered a status symbol because of its associations with wealth.

While diet can certainly affect the risk of developing gout, it not the sole factor of the condition. Gout, as we understand it today, is a form of arthritis brought about by high levels of uric acid in the blood. Genetics play a large role in developing hyperuricemia, an abnormally high level of uric acid in the blood, and gout is comorbid with several other medical conditions. A diet high in purines—a substance found in meats, shellfish, and dark-colored alcohols such as port, claret, and porter—are broken down by the body into uric acid. At high levels, uric acid crystallizes and deposits in the joints. Gout can affect any part of the body but tends to favor the extremities because of their lower body temperatures. Classically, gout targets the joint of the big toe due to frequent use. In many of the images below, the foot is identified as the affected limb.

A popular belief throughout the 16th and 18th century was that gout was associated with venereal disease. Syphilis or the “pox” was believed to be a potential cause of the gout. In England, gout was often referred to as the “French Pox.” The English Physician Thomas Sydenham wrote the following in 1683:

Gouty patients are, generally, either old men or men who have so worn themselves out in youth as to have brought on a premature old age—of such dissolute habits none being more common than the premature and excessive indulgence in venery and the like exhausting passions.

Although the association of gout and venereal disease was largely abandoned by the medical profession in the 19th century, the cultural connotations persisted. In several of the cartoons below, impotent gout-ridden men are paired with images of lascivious couples to suggest that past sexual indulgence has lead to the men’s present day suffering.

Nobody Laughs at a Touch of the Gout, John Lewis Marks, 1814, Wellcome Collection

The Gout or one of the Misiries of Life, G. Sauley, Colored Etching by Nicolaus Heideloff, 1806, Wellcome Collection

The Beauties of the Poets no. 5 The Noble Art, Thomas Best, Date Unknown, Wellcome Collection

Relief from the Gout!!, Published by W. Holland, 1801, Wellcome Collection

By Royal Authority: A new way of mounting your horse in spite of the gout!!, Unknown Artist, 18??, Cushing/Whitney Medical Library

The Hertford Doctorefs, or a Consultation upon the Gout in the Great Toe, George Cruikshank, 1819, Wellcome Collection

A Change in the Head of Affairs, William Heath, 1828, Wellcome Collection

The Brightest Star in the State, or, a peep out of a Royal Window, William Benbow, 1820, The British Museum

Punch Cures the Gout, the Colic, and the 'Tisick, James Gillray, 1799, Wellcome Collection

A Sudden Call: or one of the Corporation, Summoned from his favorite Amusement, Artist Unknown, Published by S.W. Forbes, 1799, The National Library of Medicine

A Military Salutation, P. Roberts, 1807, The National Library of Medicine

All the World's a Stage,and one man in his time plays many parts, William Heath, 1824, Wellcome Collection

Another popular 19th century treatment for gout was soaking in the Roman-built thermal mineral springs located in Bath, England. Thomas Rowlandson’s 1798 series of plates entitled The Comforts of Bath feature many gout-ridden elderly men seeking relief at one of Bath’s posh resorts.

Emily Winter is an archivist of everything from the miasmatic to the purulent.